When I crossed the finish line for the 2018 Boston Marathon, a few things were running through my head: 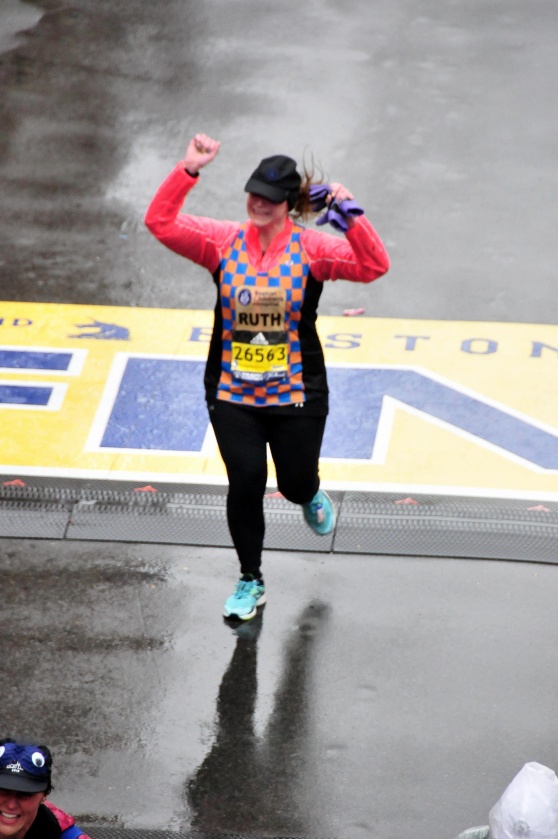 I got my medal, was wrapped up in a warming blanket, hobbled back to my hotel, met up with my family and friends, peeled off my soaking wet clothes and shoes that together literally weighed 8 lbs more than when I started, took a hot shower, got a burrito, then went home. And I figured that would be it. Back to 5Ks, 10Ks and the occasional half marathon for me. But no more marathons. No way, no how.

Yet I found myself over the next few days feeling empty, and without a goal. I had spent the last 4+ months training, fundraising over $13,000 for Boston Children’s Hospital, and bonding with an amazing group of people on the Miles for Miracles Team. What was I going to do now? I mean, yes, I run a successful business, am married and a mom to a toddler, have a generally busy life…it’s not like I didn’t ACTUALLY have anything to do. But running Boston had changed me. There was a hole left by not having something to train for. I happened to read something about the Abbott World Marathon Majors (run Boston, New York, Chicago, London, Berlin and Tokyo and get some crazy bling) and before I was a week post-marathon had decided with my friend and fellow runner Carolyn that we were going to pursue that as our next goal. So much for no more marathons!

So, one down, 5 to go to get my medal for the Abbott WMMs…right? Sure, I could have taken my 5:53 finish at Boston and said “On to London!” But there was something nagging at me.

I had run Boston, and it was amazing and terrible all at once. But I HADN’T run it in less than 5 hours, which was my original goal. And I HADN’T had the same experience I would have had if the weather had not been freezing torrential rain–not just the physical aspect of it, but the emotional one. Throughout training we heard stories of the crowd support along the course, particularly at Heartbreak Hill. And although there were many incredible people, including some of my own friends and family, who came out to the course to cheer me and the other runners on and/or volunteer, the historic crowds were just not there by the time I passed by. So the combination of being a competitive person (I’m a slow runner and am never going to qualify for any marathon, but I’m competing with myself) and feeling like I missed out in some way on the “full” Boston experience drove me to go after it again.

I applied to and was lucky enough to be accepted back onto the Boston Children’s Hospital Miles for Miracles team for the second year in a row. (Running for a charity is the only way to get into the Boston Marathon for people like me who cannot qualify based on time–I would have to be able to run a marathon in 3hrs 40min 08sec or less to have been granted entry in 2019 and let’s face it–that is never gonna happen!). I could not imagine running for another charity for the Boston Marathon, since BCH has given SO much to our family, and since I had such an amazing experience training with all those dedicated runners last year.  (More on all of that in blogs to come).

I have a lot of work to do. I’m 40 pounds overweight and I have been running sporadically, at best, since April. I’ve barely worked out. My back is all jacked up and my feet have started hurting in weird places for no reason. But I’m determined to get in the best shape I can to prepare for what’s ahead of me. I’m working with a nutritionist and have my cross-training and running schedules all planned out. I see my chiropractor regularly. I’m GOING to do this.

Do I think I’m ever going to run a 7 minute mile? Nope. But I WILL run the best marathons I can in 2019 and beyond. Oh yes, you read that right–MARATHONS. Because I’m running London LESS THAN TWO WEEKS after Boston. Assuming those don’t kill me, I’m hoping to run at least NYC in Fall 2019 as well. We will see what comes after that.

First training run tomorrow. One mile at a time. One foot in front of the other. Let’s do this.

View all posts by ruthberubeleach